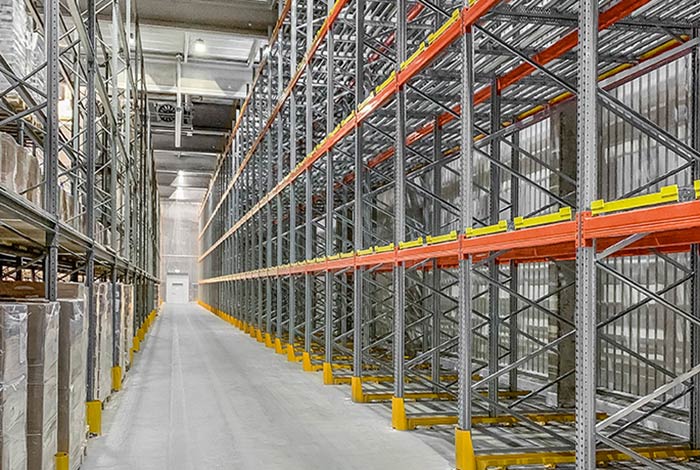 With a nationwide logistics network of 40 company-owned locations throughout Germany, NORDFROST, based in Schortens near Wilhelmshaven in Friesland, is the market leader in German deep-freeze logistics. The internationally active NORDFROST Group operates one of its largest logistics locations in Groß-Gerau, Hesse, near Frankfurt Airport. Five years ago, the location was already expanded with the construction of a new, 5,000 square meter transshipment hall as well as extensive modernization and the installation of new technology. "We continually keep the storage technology at our locations up to date and are constantly expanding our capacities in line with demand," summarizes Peter Wilke, technical director of NORDFROST.

After all, one of NORDFROST's great strengths as a logistics service provider for the food industry and food retail trade is its ability to react flexibly to new customer requirements. The company recently decided to restructure the intralogistics department of a section of the logistics center in Groß-Gerau. The project was carried out by AR Racking. "AR Racking made us a convincing offer," Wilke explains the reason for awarding the contract. "AR Racking not only covered the design and installation of a new system, but also a wide range of additional tasks”.

Within six weeks AR Racking realized the scope of the order. A two-row, more than 73-meter-long push-back racking system was designed along the longitudinal walls of the hall in an existing building. The frame height of ten meters allows for five storage levels, the upper four of which have continuous roller conveyors and a slight slope of four percent. "With a depth of around two and a half meters and a width of two meters, the 35 channels per rack row provide space for four pallets each," explains Roland Fischer, responsible Key Account Manager AR Racking. "The clamping length of the roller conveyors is designed for 850 millimeters. This system design ensures that pallets in the channels are always presented on the aisle side and can be picked up easily by the reach trucks used. This is important so that double-deep storage on the higher shelf levels does not cause problems if forklifts without telescopic forks are used. 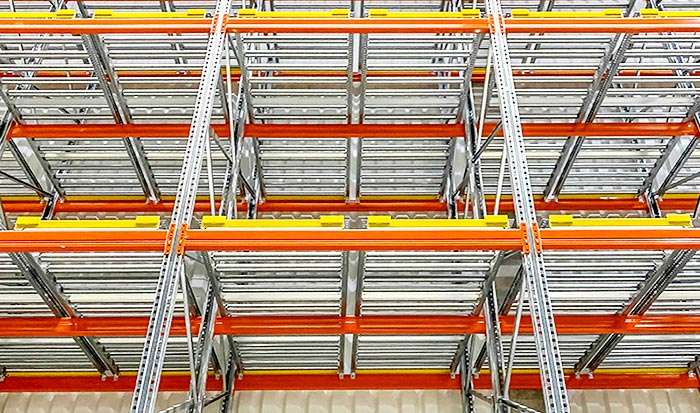 In addition to the two rack rows, AR Racking installed a smaller rack row with 80 pallet spaces on five levels at the front of the hall in the same design. In total, the new push-back racking system offers 1,470 pallet spaces. The static design of the racking system was carried out according to EN 15.512 DE. Furthermore, all rack channels along the frames are equipped with guide profiles. With the components used, the system is also completely designed for the special conditions of deep-freeze storage with an ambient temperature of up to -25º C and - with regard to safety and technology - for the standards and guidelines according to DGUV 108-007, DIN EN ISO 14122 (part 1-4) and EN 15635. "The entire system was installed by our fitters under freezing conditions during operation", Fischer emphasizes. "A considerable challenge in terms of occupational safety, security and work processes."

In order to implement this system, however, the experts in the existing building first had to professionally dismantle the previous Narrow Aisle Racking system - a type of racking that is not normally used at NORDFROST and which was to be replaced. "As a multiplayer for various storage systems, our range of services enabled us to cover both the design and installation of the new push-back racking system and to carry out the previously required dismantling of the existing systems as well as the reassembly of dismantled rows of shelves and various other additional work", Fischer emphasizes. For the implementation, the course of the project was timed accordingly. In the first steps, two of the four carriages of the narrow aisle mobile racking system with 19 rack bays each as well as a single rack row with forced guidance and a small slide-in rack were dismantled and removed. Subsequently, AR Racking installed a new wall cladding made of sheet metal panels. Parallel to this, the assembly of the new system and the dismantling of the remaining components of the mobile racking system began on the free longitudinal side of the building.

Subsequently, the re-assembly of two double rack rows followed, which AR Racking used for NORDFROST from the dismantled rack components. For this purpose, AR Racking supplied and installed new double anchors for the frames and brought in 80 pieces of column protection for the newly installed existing racks.

After the assembly of the two double rack rows from the old stock was finished, the assemblers from AR Racking completed the project with the installation of the second new slide-in rack row on the long side and the new slide-in rack system on the front side of the hall.

"An integrated project management, especially with regard to the additional tasks that AR Racking took on in the project in addition to delivery and installation of the new system, and an absolutely on-schedule project progress", summarizes Peter Wilke. "Thanks to the plant design, the efficiency of the process flows in this work area in Groß-Gerau could be increased. We are also very satisfied with the quality of the results".

Coresa Group, leader in Latin America in electrical and lighting materials, entrusted AR Racking to equip its new warehouse at the Carpitas Lurín Logistics Centre in Peru. The company,...