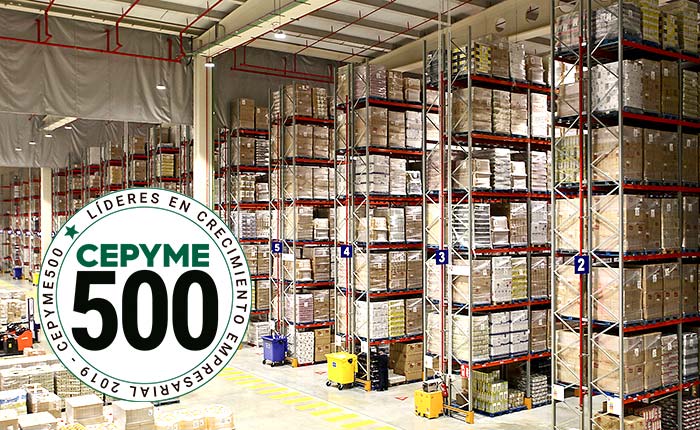 AR Racking has been selected as a CEPYME500 Company by the Spanish Confederation of Small and Medium Companies (CEPYME); an award that recognises the leading companies in growth in Spain both due to their financial results and their ability to generate added value, employment, innovation and international projection.

This is the third year in which CEPYME grants this recognition, which takes into account criteria such as turnover, sustained growth, size and profitability, all of them rigorously evaluated to be selected as one of the 500 leading companies in the state. The main advantage of this initiative is to grant a national and international recognition and projection to the companies that have been selected, thus improving their growth potential and visibility.

This appointment recognises the growth and positioning of AR Racking as a European leader in storage solutions. The truth is that with an export rate of over 90%, AR currently Racking has a commercial presence in more than 60 countries. Likewise, it has a technological centre where it develops its activity in RD&I, a fully automated production centre of over 35,000 m2 and the AR Lab, the Research and Testing Laboratory at the University of Mondragón, opened in 2019.

The designation as CEPYME500 Company represents a further recognition of the daily work of the team that makes up AR Racking, who recently also received the Xcellens Award 2019 for their work in the prevention of occupational hazards, which is a small impulse to face another year, 2020, with perspectives to continue improving and growing in all senses.