AR Racking -a leading company in the European storage solutions market with headquarters in Zamudio (Spain)- and Mondragon Unibertsitatea (MU) -a university recognized for its marked technological and innovative profile- have ratified a collaboration agreement with an official visit to the AR Lab. This AR Racking’s classroom is located in the facilities of the Mechanical Design Laboratory (DMLab) of the university’s Higher Polytechnic School and is devoted to research and collaborative development.

The AR Lab is a permanent space. It is a room where basic and applied research programs, doctoral theses and specialized training are developed. The classroom is also equipped with a laboratory for experimental tests suitable to carry out, on one hand, systematic product tests for standard compliance, and on the other, virtual tests oriented to the simulation and generation of new knowledge.

The AR Lab classroom, part of the DMLab’s research program "Prototypes development and test benches" is oriented to the development of prototype machines and experimental characterization. Its test bench is a pioneer in the sector. AR Lab’s test bench integrates various test areas for struts, connectors, racks, beams and other components, with a maximum capacity of 80 tn. Some of the tests have already begun and it is projected that in a near future other tests will progressively start.

Having the AR Lab’s test bench will enable AR Racking to study in detail the behavior of its products, thus enhancing the constant improvement of its storage solutions. The synergy created with the AR Lab will also make it possible to increase in real time the Mondragon Unibertsitatea’s know-how, opening new paths for research and training. 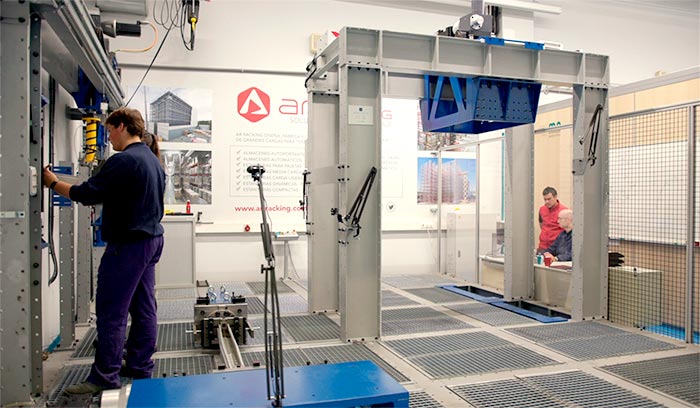 The collaborative project materialized in the AR Lab classroom -which began to take shape in 2017 and whose first tests were carried out in 2019 after a detailed effort- is completed with two other lines of collaboration that will link AR Racking and Mondragon Unibertsitatea. Both entities work together in a research project on the digitization of sheet metal profiling processes and in a project linked to the inspection of welding on beams.

These different lines of collaboration are a testimony of AR Racking’s firm commitment for research and innovation as an intrinsic part of its idiosyncrasy and also Mondragon Unibertsitatea's solid commitment to development and proximity to the business world. With this new agreement, 22 companies have already signed collaborative research agreements with Mondragon Unibertsitatea, a clear example of the strength of the collaborative research model promoted by the university.

The current Sales Director for conventional solutions in the EMEA markets, José Manuel Lucio, has been appointed as the new Managing Director of AR Racking starting 1 January 2022, replacing...

Mecamur, at a glance: Our history began in 1996, when we started working for companies dedicated to the sale of metal shelving. Later, in 2004, MECAMUR MONTAJES, S.L. was founded with the intention...